Around a month or so ago I decided that I wanted to change my life to try and be happier. I mentioned in a blog post titled, ‘Starting to Make a Change,’ that I wanted to keep track of the progress I make through my blog, mainly for myself but also for anyone else who may be interested. This post may be overdue but I have a clearer mind to write it now rather than last week when I was basically hating everything.

Perhaps the biggest physical change that has occurred is that I have been leaving my flat with the sole intention of exercise. I call it going on a run when it’s more of a jog/power walk most of the time as I’m rather unfit, but it’s a start. If I ignore the fact that I’m gasping for air and my sides ache I quite enjoy going out. I always go to Holyrood Park which is beautiful so I often stop for a little break to sit and watch the swans. As I am liking it more than I thought I would, I’m contemplating whether I should aim to run a 5K over the Summer. I’ve been looking on Pinterest for workout regimes and exercise plans so as soon as I’m back in Edinburgh (I’m currently in Aberdeen for the Easter holidays) I will probably choose one to follow to get fitter and hopefully also relieve some stress about the end of the school year.

Unfortunately, my diet is just as bad as it’s ever been. I had managed to finish off all my snacks to give me a clean slate for a new beginning but I became ill and basically bedridden so I resorted to comfort-eating the treats my friend bought me to cheer me up. It helped me be slightly more positive morally just not physically. Now that I am better I’ll try and eat my remaining snacks in moderation but I have a fairly bad mindset of, “If I eat it all now I can’t eat any for the rest of the week.”

Even small alterations to my diet such as drink more water is not happening the way that I had hoped. I fill my glass of water up and drink it fairly quickly but then don’t refill it for a long while, which is just counterproductive. I don’t know if it’s because I’m lazy or in other situations when I’m too engrossed in a task that I don’t want to move for fear of losing my train of thought or concentration. I’ll probably fill up my water bottle instead of a glass that way it will reduce the number of times I have to get up so there is another solution besides getting off my ass.

Despite hiding in my flat for a lot of this last week I have been more sociable and gone out with my friends more. I like it when my calendar looks full so I write all the little things I do on it to make myself feel important and more motivated. My friends and I have been out for lunches and drinks as well as attending the University of Edinburgh’s Music Ball last week, which was hella fun. I may be spending more money on going out now but I think it’s better I do that rather than sit in my room and online shop all day, especially when I’m constantly getting emails through about mid-season sales.

Whilst I haven’t necessarily read the self-help books as much as I had intended, I have been reading some of my other books instead. I finished ‘Death Comes to Pemberley,’ which was the wrong novel to choose as a welcome back to reading due to its old-fashioned language. I have started a new book which I bought not knowing it was a biography and not fiction called, Constance: The Tragic and Scandalous Life of Mrs Oscar Wilde,’ which I am hugely enjoying. It is teaching me a lot about the Aesthetic Movement of the 1800’s which I have taken a great interest to. Over the Summer I plan to research it further and perhaps write a blog post or two on it. Unfortunately, I forgot to bring my book with me to Aberdeen so I am reading some old favourites whilst I am here to make sure I keep the habit. This will hopefully cut down my phone use more throughout the year. 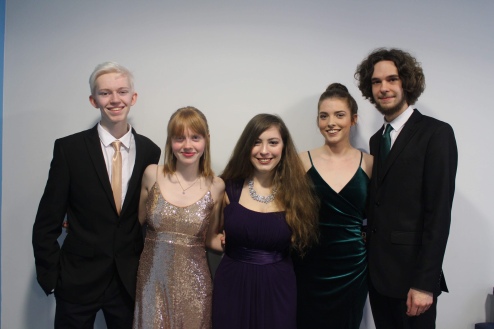 Digitally, my life is a bit here and there. I mentioned in my plan to change I wanted to be spending less time on my phone, which sometimes happens. I think I am cutting back slowly by making small changes such watching a film on my laptop and turning off my phone like I would in the cinema so I’m not distracted by social media for a while. I need to do the same thing when working on uni assignments but there is only so long I can focus on a chorale or string quartet before needing something to alleviate myself for a while.

Recently I also decided to change my username on Twitter and Instagram. I had been using the name, ‘PiranhaPearl’ since I was thirteen and deep in my emo phase. Now that I have a blog I wanted uniformity across my social media in order to present myself as a somewhat more mature individual. By doing this I hope to identify myself more with blogging too. I would like to grow my blog perhaps as a brand but definitely into something that is more successful than it currently is so hopefully, by giving myself the mindset that I am a blogger, it will be apparent when I write.

It seems that as my blog gets older, my posts become less frequent and it worries me. Due to my other failed attempts at starting a blog on numerous occasions, I’m concerned that this one will just add to the list of defeats. On my phone I have a list of nearly 30 blog posts I would like to write so when I get back to Edinburgh I am going to transfer these ideas to a notepad so I can expand on them and jot down any notes I may have. I’m trusting that this should lead to better posts with a clearer structure, more consistent updates and a better idea of who I am as a person. I have now finished all my lectures and tutorials for my first year of university which is as exciting as it is terrifying but it has given me much more time to focus on my blog. I can now use my weeks to go out, take pictures, go shopping and eat lots of cake in cafes in order to write more content that I find is interesting.

What I am pleased to see is that some people have started to actively read my blog. If this is the first post of mine you have read and you’re somewhat intrigued by my topsy-turvy personality you can follow my blog via email or social media, all the links are below in the black bar but I’ll link them in this post to for the sake of it. I just wanna say thanks to anyone who is reading. I generally write as if I’m having a conversation with someone and just hope that there is a person on the other end reading. It’s really heartwarming when somebody messages me about my blog, even when they are just pointing out a spelling mistake. Maybe one day I’ll have a community of my own, like the bloggers that I follow, consisting of people who relate and help each other but that’s probably a long way in the future. So for now, thank you again for reading and I’ll speak to you soon.